EGAD!  Painting by Hand or Computers?

"Computers SEEMED to be the way to grow in 1983," writes Craig Luce, "and I was entirely too early to that party.  That's when we said the cutting edge was ALL blade and no handle!"
That was 20 years ago.
He began working on high-end computers, as did a couple of other medical illustrators.  Working with SGIs in Unix with only line-entry control!   The software to do the simplest thing was still being written at the same time..... and cost over $100,000!

"I was looking to the future, and thought it would come so fast that I had to stay ahead of it.  HOW?  By taking all the punches chin-first.  What a lug."  He started with high-end animation just after the announcements of Jurrasic Park... using the same software, Softimage.  "That is, using computers for what they were best at doing--- repetition and recalculation."

Only after 1994 did he start doing still drawings on The Box.  "Seemed that hand work was OK for that.  When I visited MCG in 1988, I told the faculty that we would all be doing our work on computers within 3 years, and showed them what Photoshop could do, quickly drawing an eye on their Mac (then only in Black and white).  It took a little (ONLY a little) while longer."

"Then I spent more than several years hitting every project Nail with that Hammer.  You know-- like when you get a new tool that you like, everything gets it, no matter whether it is the best tool for the job or not."  Though several clients, notably John Jane at UVA Neurosurgery, had eschewed the computer 'look', "I still kept going, that Computer Hammer was still lookin good and hi-tech to ME."

Then it seemed that most everyone in my field caught on --- about 1996.  But to what end?
"Now that most illustration is done by computer, it all looks the same!"  Thumb-through any text or especially a catalog or journal--- even the palettes are the same (the range of colors used).

After working on computers for so many years, Mr. Luce is returning to the hand-crafting of illustrations--
carbon-dust drawings and oil paintings, in that these media have the tactile quality
that we have all admired in the past.
Everything old is new--- again!

"This means that 'computer art' is out--- that illustrations will be hand-drawn in the traditional manner of the masters."  These are then scanned and manipulated if necessary.   "The computer is good for some things, like repeating elements, but IT HAS NO SOUL.  Yes, with a lot of perseverence, beautiful images can be coaxed out of it, but at what cost--- at the cost of being an artist!?"

Luce proved he had mastered the medium (see example), but felt he had betrayed his training and heritage--- of handling images directly, wringing the image out, without the intervention of the computer..

"The MAKING of it by hand is much more relevant to the fine artist.  Working DIRECTLY with pigments is what guided my initial desire to make these works, some of the technique is no longer taught in schools, and some media which are original to my work."

"When I worked with Frank Netter, his direct approach dictated that the CONTENT was all-important, and the painting better look like something the physician/viewer could identify.  Frank always said that one could TALK around a topic, but as to the picture-- it ALL has to be in there."  Click to go to Netter.

Now its the rarer find to have the look of the masters of illustration, and
there is a demand for craftsmanship again.  "You cannot just write a check and get this."
Its about time! 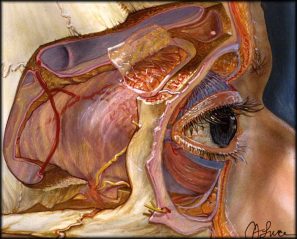